How Fashion Brands Predict the Future 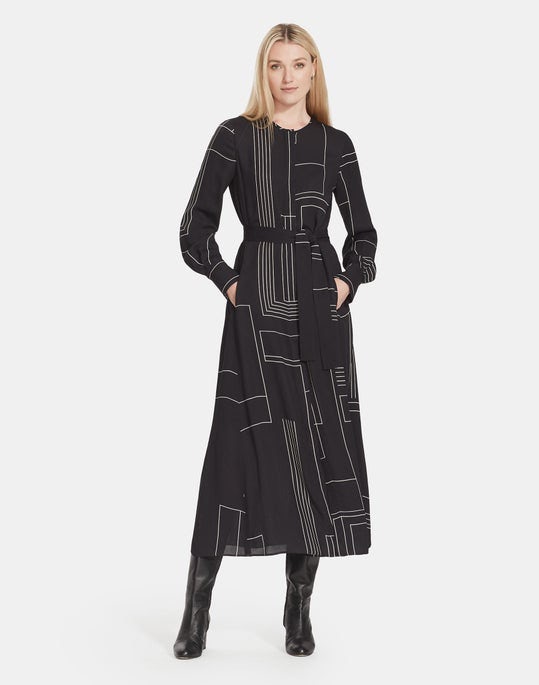 NEW YORK, United States — Lafayette 148 knew it had a hit on its hands with a belted long-sleeve black dress with white geometric lines — previous versions of that silhouette had sold well for the contemporary label. But the brand did not expect the avalanche of pre-orders that came in response to a teaser email featuring the item.

The brand had hundreds of dresses stashed in warehouses awaiting delivery to retailers like Bergdorf Goodman and Nordstrom, though nowhere near enough to satisfy the unexpected spike in early demand.

“Did we make enough? If not, can we make more? Can we cut that dress in another fabric?” said Co-Founder and Chief Executive Deirdre Quinn.

The company is now cutting 50 additional dresses and introduced a second version in white with black geometric lines. The black version is currently sold out in five sizes.

Fashion brands can live or die based on how well they are able to balance supply and demand. Producing too little means lost sales and frustrated customers. Overproduction is a recipe for wasted spending and profit-sapping end-of-season sales. There is no perfect formula, and managing inventory has only gotten harder with the rise of e-commerce, as demand can come from anywhere, at any time.

The mismatch affects companies in every corner of the fashion business. Capri Holdings said earlier this month it failed to anticipate demand for a new line of Jimmy Choo sneakers, and in May Nordstrom blamed poor merchandising choices in women’s apparel for weaker-than-expected first-quarter sales. Under Armour spent much of the last year heavily discounting merchandise to slim down bloated inventories, and H&M continues to struggle with a $4 billion stockpile of unsold clothes.

“Inventory doesn’t age like fine wine, it ages like fresh fish,” said Eric Fisch, national sector head of retail and apparel at HSBC’s corporate banking division. His clients are apparel companies that often seek loans when they’re struggling to sell last season’s inventory while needing to manufacture next season’s products. “Ultimately, it will affect a company’s profitability and [cash flow].”

The fashion industry has plenty of ways to manage inventories, such as speeding up the production cycle to be more responsive to shifts in demand. But a growing number of companies are looking beyond simply reacting to changes in consumer behaviour. They want to predict the future.

Brands are getting better at using the vast amount of data collected on customers to predict what they’ll buy next. Numerous start-ups claim they can forecast with pinpoint accuracy what consumers will find stylish months in advance, advising labels on how many of each article of clothing to produce and how much of that inventory to hold in each store and warehouse.

“For example, the combination of weather at a particular location within a particular demographic could cause a spike in sales, because there might be a hidden correlation between colour, size, weather and geolocation,” said Ahmed Zaidi, a researcher at Cambridge’s machine learning department and founder of data science consultancy Catalyst AI, whose clients include PVH and Superdry.

There are thousands of predictive analytics start-ups documented by Crunchbase, which have secured billions of dollars in funding. Estimated global spending on AI products is projected to reach $36 billion in 2019, a 44 percent increase from last year, according to a study by research firm IDC. Earlier this month, Nike acquired Celect, a Boston-based demand forecasting and inventory optimisation firm.

“Machine learning is just correlation on steroids, an evolution of inputs and outputs,” said Fabrizio Fantini, founder of Evo, a start-up that uses data as diverse as historical sales numbers to global trends to the weather to predict how different styles of clothing will perform in various markets, or even individual stores. “It’s the plug and play version of what we used to do manually, with Excel.”

Retail AI solutions rely on “neural networks” inspired by neurons in the brain to capture patterns and trends through image processing and a massive amount of data input.

The technology has a long way to go to live up to its promise. Neural networks were first used in retail about a decade ago, Zaidi said, and found widespread use by platforms like Amazon and Netflix to create personalised recommendations.

Predicting demand is much harder; complicated data sets can lead AI astray, such as Microsoft’s failed 2016 experiment with an AI chatbot that was supposed to mimic the way teens talk but instead picked up racist, sexist and abusive language.

Stitch Fix employs a team of more than 100 data scientists to help buyers and stylists make sense of data collected at every touchpoint, from the initial style profile that every shopper fills out to the reviews they leave for their purchases.

The ultimate goal of many retail companies is to develop artificial intelligence that can outperform human buyers and supply chain managers.

Machine learning is just correlation on steroids, an evolution of inputs and outputs.

“No one has a crystal ball over what trends will register,” said Liz Fraser, President at Lafayette 148. “And just because something sold well last year doesn’t mean it will sell well this year.”

Not even the most sophisticated machine learning technology has managed to crack the style code, however, and the fashion industry is still in the early innings of integrating AI solutions.

When it comes to forecasting, myriad variables are at play. Predicting that a simple black dress will sell well across a brand’s stores, or that parkas will perform better in colder climates, is easy. Predicting whether last year’s runway trend of statement brooches will succeed beyond fashion-forward markets like New York — or fall flat entirely — is harder.

After all, AI could not have foreseen that a pair of Rothy’s flats would quadruple in sales the day Meghan Markle wore the shoes on a beach outing in Australia.

Brands and technology firms say the answer is more data. Stitch Fix encourages customers to use its Style Shuffle tool, where they can give thumbs-up or thumbs-down to items. The company used 700 ratings to determine customers prefer graphic T-shirts featuring coffee more than images of skulls.

Even brands that haven’t incorporated AI find new data points useful. Lafayette 148 uses a web application called Skypad that tracks sales performance for each item in each store or channel in real-time, allowing Quinn and her team to identify opportunities to redistribute inventory and replenish products.

Tamara Mellon uses a platform called MakerSights, which surveys its customers on potential new products, enabling the company to plan for the size of an order based on early signs of popularity. Paired with nimble manufacturing, the shoe brand is able to sell through at least 50 percent of its average product mix within 30 days, according to Director of Merchandising Vanessa Lugo.

Zaidi said the debate hasn’t been settled over whether AI can outperform a human buyer’s gut instinct. When companies are beginning to experiment with predictive analytics, he suggests carrying out a simple test: assign a team of merchandisers to set seasonal markdowns on products with an AI-powered solution and another team without.

“The job changes but in my world, merchandisers still have a birds-eye view and the capacity to control inventory,” he said. “With my clients, they’ve hired more people actually.”

Experiencing challenges due to COVID-19?
We're here to help. We've curated a selection of resources to help you navigate these uncertain times.